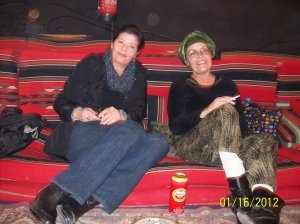 Travel to foreign and exotic places opens my eyes and reminds me of other realities unlike my own.

1/Cold nights in a Bedouin tent, smoking and drinking with the natives.

2/Two Mikes
On the left our bodyguard, whose presence allowed us entry into the most unlikely places, safely. Mike on the right was a minister in a small mid-western town, sent on  a missionary journey by his family and congregation with no return date projected. He had never tasted alcohol and couldn’t wrap his head around two  American women in Jordan, he had to sit when we told him we were bellydancers.

3/No name mercenary. Translated  by our bodyguard about the “arms deal” being made around the camp fire. We gladly shared our alcohol, but kept our charms hidden.

Note to self, this was almost a year to the day that we had departed from Egypt on the eve of Arab Spring, highlights of news were reports of Mubarak’s trial.

http://en.wikipedia.org/wiki/Petra   Check this link out for the historical significance dating back to biblical times.  Check out these photos which can give you an idea of its majestic proportions. 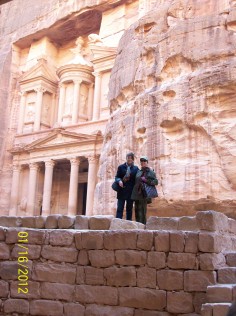 These are taken on a brisk January day, where the wind was cool and the sun hot. Just a day after our arrival from Istanbul, where we were met with snow flurries, electrical outages in the Grand Bazaar and a hammam in a 15th century bath house, Petra offered us a respite of sorts. It is enough to take your breath away in delight and fascination, that something so big and grand in proportions, advanced in design could be remaining from so long ago.  Outside  the entrance to Petra, is a hotel formed out of rock, to complement the site. Appropriately named, “the Cave”  is it’s nightclub. Where you can smoke nargeely with the local Bedouins, enjoy a traditional mezza, drink alcohol, (which is a challenge to come by FYI) and dance rap and shaabi  infused debke!  What are two semi retired belly dancers, one who has brain cancer, the other who chronically burns the candle at both ends doing in Jordan? It just seemed like the thing to do!  It is one of the seven wonders of the world after all. Sateen. 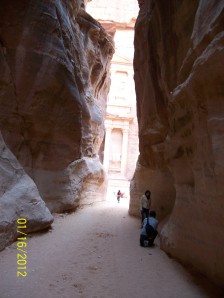